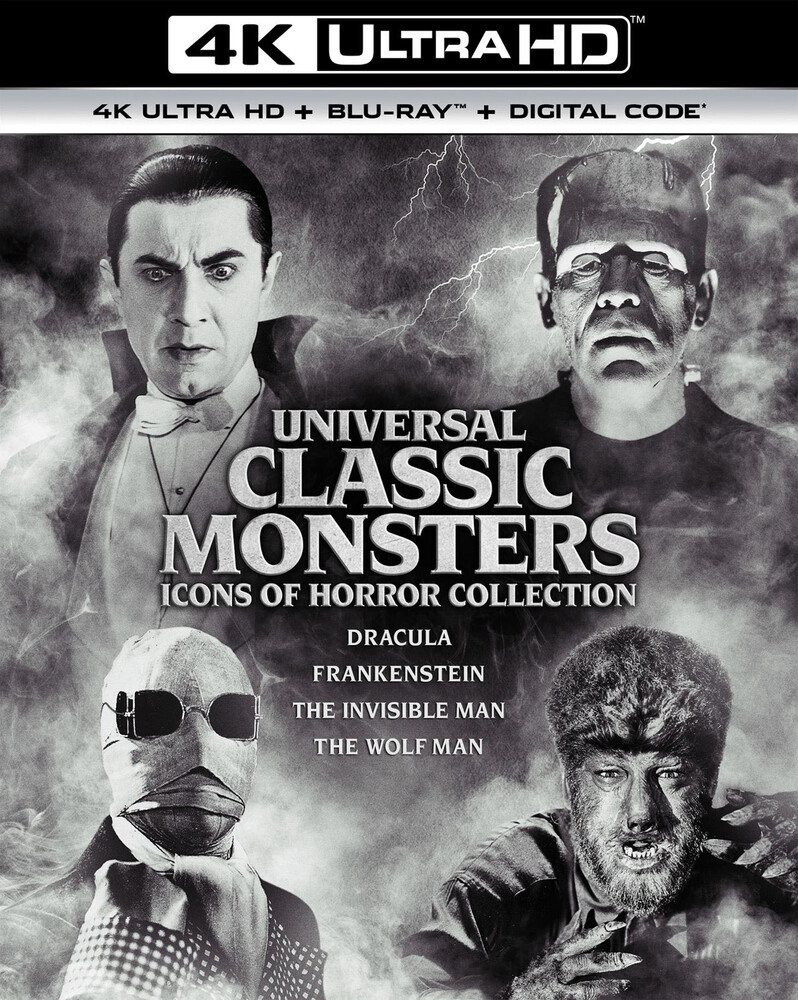 Eight-disc set includes: Dracula (1931)After starring in the title role on Broadway, Bela Lugosi became forever identified with the bloodsucking count in director Tod Browning's Gothic film adaptation. Follow Dracula from his Transylvanian castle to England as he ensnares the unwary in his diabolical schemes. With Dwight Frye, Helen Chandler, Edward Van Sloan. 75 min. BW/Rtg: NR Frankenstein (1931)Based on the novel by Mary Shelley, this classic chiller helped usher in the age of the Universal monsters. When mad scientist Henry Frankenstein (Colin Clive) pieces together body parts taken from various corpses with hopes of creating life, his resulting production (Boris Karloff, in a career-defining performance) demonstrates the consequences of toying with nature. With Mae Clarke, Dwight Frye; directed by James Whale. Restored version; 71 min. BW/Rtg: NR The Invisible Man (1933)He's rarely seen in this, his film debut, but Claude Rains lends a sinister presence as H.G. Wells' "out of sight" scientist in this horror/fantasy classic from "Frankenstein" director James Whale. Rains stars as Dr. Jack Griffin, who discovers a formula that can render him invisible. But little does he know that it carries with it a dangerous side effect: It also turns him into a murdering madman. With Gloria Stuart, William Harrigan, and quintessential town biddy Una O'Connor. 71 min. BW/Rtg: NR The Wolf Man (1941)Even a man who is pure in heart and says his prayers by night, may become a wolf when the wolf bane blooms and the autumn moon is bright. Classic chiller stars Lon Chaney, Jr. As Larry Talbot, a man marked with the sign of the beast. Returning to his family's Welsh ancestral home, Talbot is the recipient of a lycanthropic curse when he's attacked by a vicious werewolf. With Claude Rains, Evelyn Ankers, Bela Lugosi, and the ever-wizened Maria Ouspenskaya. 70 min. BW/Rtg: NR Standard; Soundtracks: English DTS HD mono Master Audio, French DTS mono; Subtitles: English (SDH), Spanish; audio commentary; featurettes; 1931 Spanish-language version of "Dracula" starring Carlos VillarĂ­as; theatrical trailers; photo gallery; bonus short "Boo!" (1932).