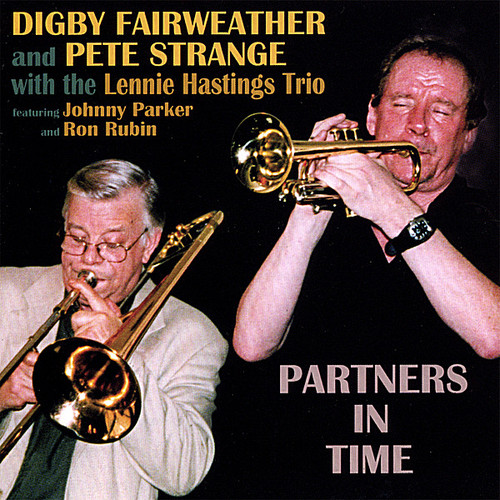 Album Description: From the mid l970s Digby's constant working-partner was trombonist Pete Strange of whom he says 'Pete - along with George Chisholm and Roy Williams - was the greatest British trombonist I ever heard!'. Strange worked early on with Bruce Turner and later from l983 until 2004 with Humphrey Lyttelton; in l994 with Digby he formed the 'Great British Jazz Band'. This album (originally issued on LP for Dawn Club as 'Lennie Hastings; always the best!') is newly remastered by Dave Bennett to present the entire evening's session, recorded live in February 1978 at Pizza Express, London. Issued on Digby's own label 'Rose Cottage Records' with new photographs and linernotes, this album is an essential portrait of a dynamic musical partnership spanning thirty years, and the best illustration of Strange's outstanding talents on record. -------------------------------------- About the Artist: Digby became a fulltime jazzman in l977 after twelve years as a qualified librarian in Southend-on-Sea. From l973 he worked his way up as a part-timer through established bands including Hugh Rainey, Eggy Ley, Eric Silk, Keith Nichols, Ron Russell and Lennie Hastings and deputized regularly for Alex Welsh, recording his first album with Welsh's band in l974. From l977, after giving up his day-job, he worked amongst others with Dave Shepherd, the Midnite Follies Orchestra, the co-operative quartet 'Velvet' (formerly Stephane Grappelli's Trio) and the Pizza Express All Stars. Later, from l983 he concentrated on a variety of solo projects (including collaborations with veterans Nat Gonella, Britain's first star trumpeter, and double-bassist Tiny Winters) and led his own band the 'Jazz Superkings'; he also founded the charity 'Jazz College' with pianist Stan Barker in l979, the National Jazz Archive in l987 and a number of other jazz-related organizations at this period, including the Association of British Jazz Musicians and Jazz Section of the Musicians' Union. During the l990s he combined playing with intensfied broadcasting (for Jazz FM, BBC World Service, and BBC Radios 2 and 3 for their five-night-a-week series 'Jazz Parade') but in l998 returned to trumpeting fulltime, going back to the BBC only for 'Specials' (including a live feature on 'Jobim's Bossa Nova', l999, and a new series with George Melly 'It's Trad Dad', 2005). A prolific award-winner, his honours include 'BBC Jazz Society's Musician of the Year' (l979), BT Jazz Awards (Trumpet l992/Services to jazz l993), Benno Haussman Award for Services to Jazz (l993), and Freedoms of both London (l992) and - his proudest achievement - of his hometown Southend-on-Sea (in their 'Millennium Roll of Honour' 2000). Fairweather played in the 'Best of British Jazz' package (alongside the legendary Don Lusher from 2000-2006, the year of Lusher's death) and continues to lead the 'Great British Jazz Band' (co-founded with his close friend the late trombonist Pete Strange in l994). His own group 'Digby Fairweather's Half Dozen' (founded in l995) began national touring alongside blues legend George Melly in January 2003 and won 'Best Small Group' in the British Jazz Awards for 2005/6. Since teaming with Melly, Fairweather (who has appeared on over sixty albums since l977) has recorded five more; including one with his Half-Dozen and Melly, 'Singing and Swinging the Blues' (Observer Record of the Week in August 2003) and 'Things ain't what they used to be' with the Half Dozen alone (which was one of the top five choices for 'CD of 2003' for Jazz Journal International editor Eddie Cook and several other critics). His autobiography 'Notes from a jazz life' was published to critical acclaim by Northway Books in Autumn 2002 and a new DVD by Zoltan films 'Scenes from a Jazz Life' (2005) tells his story in words, live footage and - of course - music! Other books he has authored or co-authored, include 'How to play the Trumpet', 'Jazz; the Essential Companion', 'Jazz; the Rough Guide', 'Grove's Dictionary of Jazz' and the 'Oxford Companion to Jazz'; his most recent book - a biography of Nat Gonella and titled 'A life in jazz', co-written with Ron Brown - was published by Northway Books in May 2005. In 2002/3 Fairweather joined a rosta of American Stars at the Blackpool Jazz Party to widespread acclaim, and in December 2005 after signing to Candid Records his second album with Melly - 'The Ultimate Melly' (featuring Jacqui Dankworth, The Swingle Singers, Van Morrison and his Half Dozen) was issued in time for his third Christmas sellout season at Ronnie Scott's to rave reviews. Digby's newest book 'On the road with George Melly; the last bows of a legend' (Robson Books) was published in August 2007 and George's last album with the Half-Dozen - 'Farewell Blues' was issued on Lake Records in September 2007. In April 2007 began a weekly show (Sunday, 3-5pm) on Britain's new national jazz station 'TheJazz' as well as continuing his busy round of appearances at jazz clubs and concert halls in Britain and Europe. He says of 'theJazz'; 'It's the most important cultural development for jazz in Britain since the Original Dixieland Jazz Band arrived in London in l9l9 and sent the whole of the country jazz crazy! I'm thrilled to be a part of it and can't wait to see what the future brings for this great station - and our music!'. Since George Melly's final performance Digby has begun a new musical teaming with pop legend Paul Jones; their new album is planned for Spring 2008 for Robinwood Productions and a documentary on the collaboration is planned with Walkergeorge Films. What they say about Digby! 'Digby is one of our most articulate jazzmen in both his words and his music. Whatever he says or whatever he plays is of great interest to the world of jazz' (Sir John Dankworth CBE) 'Digby is one of the best ambassadors jazz could have!' (Michael Dynan, The Stage) 'Digby Fairweather is a superb cornettist who will knock your lights out every time he hits high C!' (Blues and Roots Magazine) 'Much spoken of and justifiably' (Humphrey Lyttelton) 'The sweetest cat around and a marvellous player' (Warren Vache Junior) 'He knows what he? doing!' (the late great Ruby Braff) --------------------------------------.