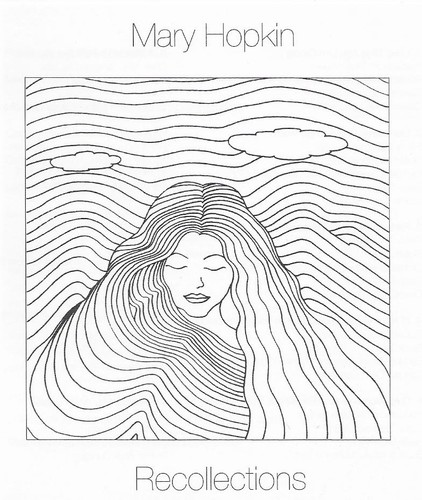 2017 collection. Mary Hopkin continues to explore her archives, dust off some long-forgotten recordings and sends them out to air and to see the light of day in a new album of old songs. Following the release of 'Valentine' in May 2007, featuring a collection from the archives, Recollections, is a further 11 gems recorded between 1970 and 1986. "There were about 30 hefty 2-inch tapes weighing heavily on my mind, and also on my bedroom ceiling," recalls Mary. "They had been gathering dust in my loft for many years, and one morning, I woke up to an ominous creaking sound, as a huge crack appeared in the ceiling. So, with some prodding from my daughter, Jessica, we decided to release them from their dusty boxes before the ceiling fell in." The songs that feature on Recollections were produced by her former husband Tony Visconti. The original recordings have now been digitally remixed and remastered at Space Studios in Cardiff, where Mary bases her recording work and record label, Mary Hopkin Music. Mary Hopkin Music was set up in 2005 to release material by Mary entirely on her own terms - recording in the studio only without having to do tours, personal appearances or interviews. It is run by her daughter Jessica Morgan from Space Studios in Cardiff (owned by Jessica and her partner Chris Thomas), which is where Mary records new material. Mary loves to write and record with her son, Morgan Visconti, and Jessica. Devoted and loyal fans as well as new listeners can look forward to previously unheard music as well as new songs by Mary.