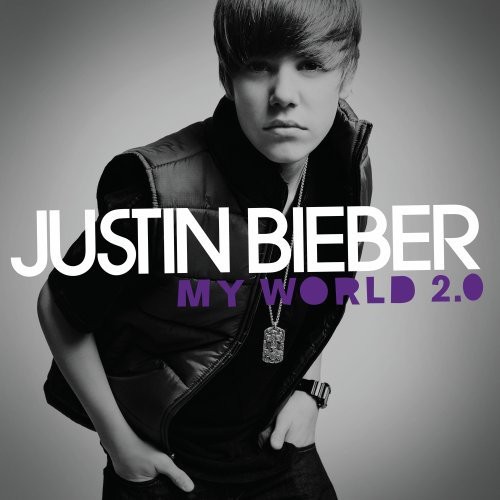 2010 release from the teen sensation, the follow-up to his million + selling 2009 mini-album My World. With his poptastic blend of urban pop, Justin Bieber has exploded as a global new media star, with over 100 Million YouTube video views (the first 10 million of them as an amateur, posting his own renditions of favorite songs by Ne-Yo, Stevie Wonder and Usher). from singing in front of President Obama to shutting down malls with hoards of screaming fans, 2009 introduced the world to it's next pop sensation and in 2010 Justin doesn't plan to slow down. Includes the single 'Baby' (with Ludacris).

''My World 2.0'' is the latter of two-part debut studio album from Canadian singer Justin Bieber, and is his first full studio release. The album is the follow-up to the first platinum certified half of the album, which was released on November 17, 2009, via Island Records, and 2.0 was first released on March 19, 2010. Bieber worked with producers and writers from his debut release, including Tricky Stewart & The-Dream and Midi Mafia, and several new including Bryan-Michael Cox, and The Stereotypes, among others. In addition to having a more dominant R&B feel than his first release, the album is described as edgier and more mature. In addition to the R&B sound, the album also combines it with pop and hip-hop sounds.

The album has received positive reviews, and debuted at number one on the U.S. ''Billboard'' 200, selling over 283,000 copies, making Bieber the youngest solo male act to top the chart since Stevie Wonder in 1963, and the first artist to occupy two top five spots on the chart since 2004. When the album sold more copies in its second week, Bieber became the first act since The Beatles to debut at number one, and sell more the following week. Bieber also had his second consecutive number one album in Canada, and in its second week the album peaked at number one in Ireland, Australia, and New Zealand. It also charted in the top ten of fifteen other countries. Bieber will support the album with his very first headlining tour, the My World Tour.