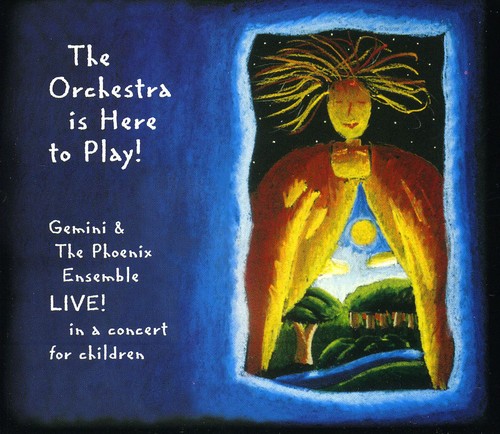 GEMINI celebrates with their audiences the fun, warmth, and humor of family life. Kids and adults love to sing with them! From start to finish, a family concert with the twin brothers abounds with rousing sing-a longs, hand motion tunes, folk tales, and music from around the world. The highlights of their shows are Gemini's original, sparkling songs about the everyday experiences of childhood and growing up. San and Laz combine uncannily matched voices with wonderful musicianship on nearly a dozen instruments. Gemini bring to their concerts a natural ease around children, and they're equally at home in an intimate setting or in front of an audience of thousands. The twin brothers have an up-beat flair for involving everyone, from tots to grandparents, in the music making. The result is a show full of laughter and grins, boisterous fun, and the magic of hushed singing. The year 2002 marks GEMINI's 29th year of playing music together. During those 29 years, from their home base in Ann Arbor, Michigan, San and Laz have performed to enthusiastic audiences at concert halls, festivals, community centers and elementary schools throughout the US and Canada. In 1997 Gemini added a new and very exciting facet to their music as they began performing with symphony orchestras, including the Detroit Symphony Orchestra and the Kansas City Symphony. More than a dozen award-winning recordings have brought their music to an even larger audience. 'Pulling Together', their 1988 recording, received a Parents' Choice Magazine award. Their next recording, 'Growing Up Together!' received the same award and was cited by the American Library Association as a 1990 Notable Children's Recording. 'Fancy That!' their first video, was voted one of the Top 10 children's videos by the American Library Association & Random House in their book '1992 Best of the Best'. 'Lullabies for Our Children', released in 1995, won a Parents' Choice Honors Award, a National Parenting Publications (NAPPA) Honors Award, and was one of only 5 recordings reviewed in the December 1995 'Best of the Year' issue of Parents Magazine. Their compilation CD, 'The Best of Gemini' received a 1999 Directors' Choice Award from Early Childhood News and also a Silver Honors Award from Parents' Choice Magazine. 'Beautiful songs and singing! Delightful!' - Robert Sherman, WQXR, the voice of the New York Times 'If the Pied Piper had been twins, odds are he would have been Gemini.' - The Detroit News 'Bravo! What a great way to celebrate families and the fun of sharing stories and songs.' - Alison Riley, Reading is Fundamental, Inc. Washington, D.C 'Gemini charmed both adults and children. It was a measure of Gemini's ability that the constant involvement of the audience, vocally and visually, detracted not at all from the performer's role.' - The Toronto Globe and Mail 'This is, quite simply, beautiful, fun music that's irresistibly singable and draws the listeners together.' - The Ann Arbor News 'Joyful, fun, rich in humor, deep in value, and best of all from our perspective, participative, personal, warm.' - North Carolina Center for the Advancement of Teachers.