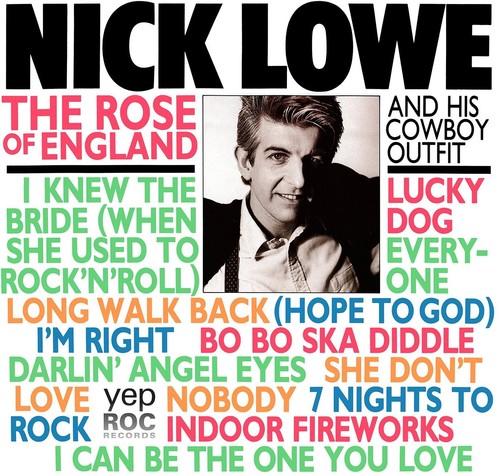 The Rose of England by Nick Lowe and his Cowboy Outfit - Teaming up again with his Cowboy Outfit, Nick Lowe's The Rose of England remains a highly engaging and often overlooked album. The title track tells a World War I-era tale that was sturdy enough to be covered by Brit-folkies The Oyster Band, and features a trademark Lowe hook. Nick took a huge swing at the charts, recording his version (previously recorded by Dave Edmunds, and played live by Rockpile) of his classic I Knew the Bride with pal Huey Lewis producing and his band the News providing the track. Fame and fortune may not have followed, but a solid batch of songs including covers of pals John Hiatt (She Don't Love Nobody) and Elvis Costello (Indoor Fireworks) rubbed shoulders with Nicks originals as well as Nicks most-covered cover (Moon Mullicans 7 Nights to Rock).