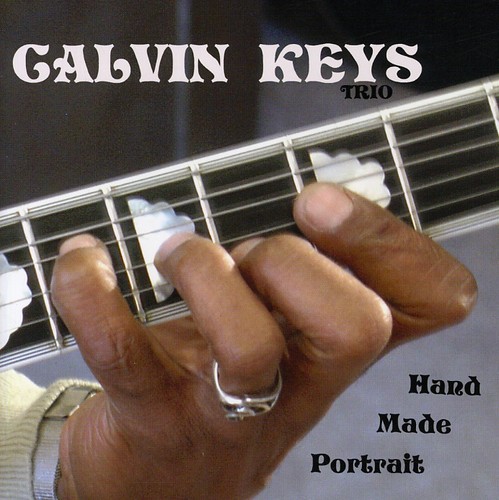 SILVERADO RECORDS TO RELEASE HAND MADE PORTRAIT, THE NEW ALBUM FROM LEGENDARY JAZZ GUITARIST CALVIN KEYS ON MAY 1, 2007 On Tuesday, May 1, 2007, Silverado Records will release Oakland, CA-based jazz guitar great Calvin Keys' newest album Hand Made Portrait. Keys's sophomore release for the label - his critically-acclaimed label debut Calvinesque (#30 on the Jazz Week jazz charts) was released in 2005 - Hand Made Portrait is a beguiling blend of classic Broadway show tunes (Accustomed to Your Face), Great American Songbook (I'll remember April), Brazilian bossa nova (Wave) and venerable jazz standards (Little Niles) (Good Bait) and (Naima). "These were some of the songs that I had been playing over the years and I just wanted to go in and record them," says Keys. "I just like these songs and I just play what I like; I play what I feel. And I'm paying compliments to some of the greatest writers who ever lived." Aided and abetted by drummer David Rokeach throughout and bassists Mark "Heshima" Williams, Jeff Chambers and Matt Montgomery on alternate tracks, the guitarist claims these songs as his own. The title of this new Calvin Keys joint alludes to both the instrument the songs are played on - Heritage Guitars' 'hand made' "Calvin Keys Golden Eagle Custom model -- and his artistic raison d'etre. "To me it's about musical painting," he muses. "That's what I do - come up with different ideas and different arrangements to evoke the poetry, use my guitar as my brush, and then paint musical portraits with my hands." Like a gifted dauber of pigment, Keys' Hand Made Portrait style is a collective reflection/conflation of the iconic masters who he studied under during his formative years. In this guitarist's case, that means Hammond B3 organ gods Jimmy Smith, Jack McDuff, and Richard "Groove" Holmes, Ray Charles and Ahmad Jamal. "People say that's 'old school', but I call it the real school," he laughs. Calvin was born in Omaha, Nebraska in 1943. A guitar prodigy, he had his first professional gig at the age of 14. In 1973, he got The Gig That Changed His Life: Ahmad Jamal. Seven years later, Calvin left his mentor to pursue a rewarding solo career. Hand Made Portrait signals his ascension to the next level. "I feel that now I've established my own sound, my spirit, my worth as a guitarist over the years and I'm enjoying every note that I'm playing now more so than I ever had. Because you do not get older in what you do, you get better. Producer Patrick Flynn and engineer Darryl Webb have gone to great lengths to insure that Calvin's new release is a close representation of what it is like to hear Calvin live,in an intimate setting. Calvin's style, always fun and inventive, shows up here in some of his famous, "can you tell what tune this is", introductions, where he can have you wondering for a moment, "Where is he going with this", then, when he knows he has you confused, as is his won't, he will gently or rudely guide you back to reality with a hint of the melody. This is a unique collection of tunes, presented in a straight ahead jazz guitar trio format, (something Keys fans have waited a good long while for), and gives the listener an intimate look at Calvin, "bare bones", "raw", "warts and perfection".