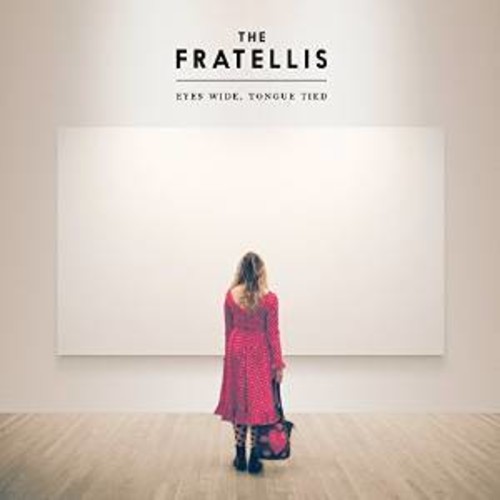 Fratelli, noun, abstract: Scottish-Italian for “to push on, and improve, with unstoppable enthusiasm, to ever greater heights”, viz: “That’s a totally Fratelli way of doing things…” The Fratellis are back, toting a vibrant, typically tune-rich new album, Eyes Wide, Tongue Tied. They’re also back from a year-long tour. Another one.

Nine years on from the release of debut album Costello Music… eight years on from winning the Brit Award for Best British Breakthrough Act… Seven years on from Costello Music finally exiting the Top 100 after 83 weeks in the charts… Six years on from recording second album Here We Stand in their own freshly-purchased Glasgow studio… Three years on from returning after a break in which frontman Jon Fratelli released two side-project albums (one under the name Codeine Velvet Club, one a solo joint) and releasing third album We Need Medicine… and zero years on from the last time ‘Chelsea Dagger’ was lustily sung by the crowd at a sports event somewhere in the world (as global event-sized anthems go, only The White Stripes’ ‘Seven Nation Army’ rivals the ongoing ubiquity of the Fratellis’ deathless 2006 Top Ten single)…

… after all that, the trio spent much of 2013 and 2014 gigging internationally. The momentum, again, still, was with Jon (vocals, guitar, piano), Barry (bass) and Mince Fratelli (drums).

It is a muscularly tuneful, sonically vibrant album – one that should make another planned year’s woth of touring a whole new adventure. “When we listened to the mixes recently I remember smiling uncontrollably. It’s the same feeling I get when I see my son, who plays drums and who is utterly, utterly obsessed with music. I was getting glimpses of that feeling you got when you first started playing – and when I put this record on when we first got it back, I had that same feeling: wow, look what we did. It’s really basic and inarguable when you get that feeling. “But also, to be honest, Barry, Mince and I get it every time we go out and play,” affirms Jon, his passion for performing as unquenchable as his ability to writer a killer tune. “On stage every night, it seems recaptured. So it seems unending, really. You walk on, no matter how terrible the day’s been, and you’re back to being that excited 17-year-old. And if that keeps going,” he smiles in conclusion, “we’ll keep going.”

The Fratellis - Baby Don't You Lie To Me! (Official Video)