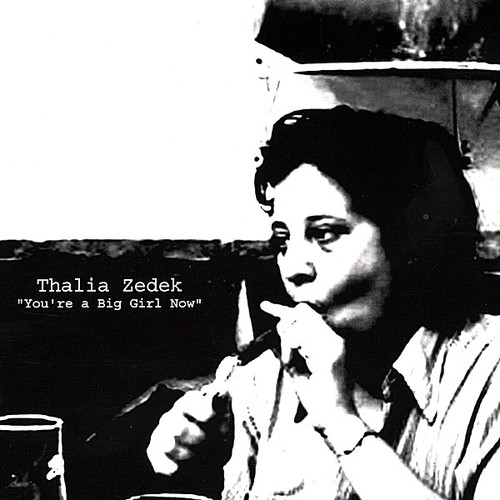 Late '70s punk rock was the turn-on for Washington D.C. teenager Thalia Zedek, who moved to Boston in 1979 and became involved with it's nascent art punk scene. Inspired by local bands like Mission of Burma, V, and Bound and Gagged, she started playing music herself, first as drummer and then guitarist and lead singer in White Women. Next came Dangerous Birds, which Thalia left after one 7'' offering (later re-released on one of the early Sub Pop cassette comps by a then unknown Bruce Pavitt) in search of something less poppy. In '84 she founded Uzi, whose more daring and abrasive creations were released on the EP Sleep Asylum on Homestead Records (later re-released on Matador Records), but who, in keeping with tradition, had broken up by the time the record came out. It did, however, bring her to the attention of one of her favorite bands at the time, New York noise punks Live Skull. Thalia stuck with these experimental noise contemporaries of Sonic Youth for two albums and an ep before their breakup and her own personal demons led her back to Boston, where she founded Come with band mainstay Chris Brokaw. They recorded four critically acclaimed albums for Matador, cementing their reputation as foremost purveyors of some of the most broodingly passionate music of the '90s. By the time the new millenium rolled in Thalia had gone solo, employing former Come-mates and others to play on Been Here and Gone on Matador and it's successor You're a Big Girl Now on Kimchee. Ms Zedek has indeed developed something of a trademark in sound: indie torchsongs for your nights without end. Thalia once again proves on You're a Big Girl Now that whatever she applies her voice and vision to becomes part of a body of seemingly timeless musical works. There is an air of authority in it's world-weariness, a certain sang froid that resists the musical trends of the day. Her songs sound lived in, thoroughly hers and of the moment. And it is always astounding how surefooted she is in choosing cover material and making it sound as if it's always had a place in the Zedek canon. The Velvet Underground's 'Candy Says,' written by Lou Reed about Warhol-circle celebrity transvestite Candy Darling, is a natural for Thalia with it's theme of alienation from the self and others. Such gender-bending subject matter plays itself out even more subtly in her moving version of Dylan's 'You're a Big Girl Now': just make the conceptual jump to song narrator as woman. Here the theme is one of lost love, commonplace in Thalia's originals here as well. That's why, with such a preponderance of depressing lyrical concerns in her music, it's such a hoot to see this package's cover photo of Thalia lighting up a big fat stogie. You're a big girl now indeed. Delightful, yes, but a pose also suggesting the confidence with which she tackles her own songwriting. 'Everything Unkind,' 'No Substitutions,' and 'No Fire' are simply as somberly grand as anything Thalia has written. And 'JJ85,' despite it's almost sprightly gait in comparison to the other song tempos, still sounds quite centered as it recounts even more dire circumstance. Thalia's band features immensely talented and long-favored folks: Daniel Coughlin from ex-band Come, Mel Lederman of Victory at Sea, and David Michael Curry of The Willard Grant Conspiracy. They impart to the material all the eloquence and gravitas needed to render these marvelous songs Zedek standards.

"I got tired of waiting/ tired of waiting for myself," sings ThaliaZedek on "Everything Unkind," one of the understated tracks on this6-song EP. It's a great line for the way she chews over each and everyword ("tired" becomes "ti-yi-yired") with the methodicalintensity of her role model Bob Dylan. And it offers a little insight into therelaxed vibe of the recording session—Zedek recorded the tracks on You'rea Big Girl Now in producer Andy Hong's living room during a break fromtouring. On the whole, this is a much less affected and stronger effort than2001's uneven Been Here and Gone. Zedek's choice of cover materialis wonderful: she reshapes the Velvet Underground's "Candy Says"as a tender piano ballad and her performance on the title track channels thedesperate energy of Dylan's original. But it's her breathtaking originalsthat command the most attention, especially "JJ85," a tonal shiftfrom the venom Zedek used to spit with her former group Come.