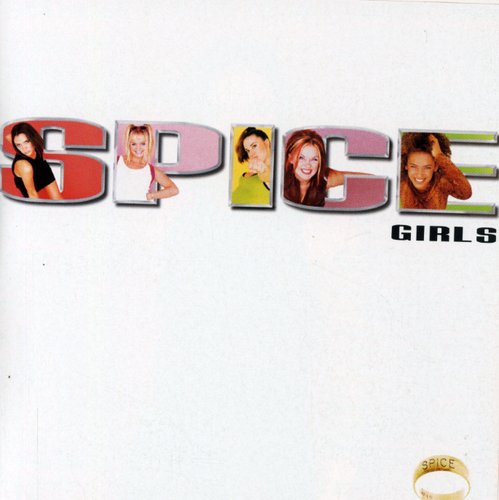 Victoria, Emma, Melanie C, Geri and Melanie B Are Spice Girls; Their Debut Single, "Wannabe," Has Sold Over 2 1/2 Million Singles Worldwide So Far, and Their Self-Titled Debut Album Has Sold Over 3 Million Copies Worldwide in It's First 4 Weeks of Release (#1 in the U.K. And 2X Platinum in Both the U.K. And Japan). MTV Loves Spice Girls! - They've Been Playing the "Wannabe" Video Since Mid-December (Top 40 Radio Is Already Playing the Single). 2nd Single: "Say You'll Be There" (Platinum in the U.K.).

''Spice'' is the debut album by British pop group Spice Girls, released on 4 November 1996 by Virgin Records. The album was recorded at Olympic Studios in Barnes, London between 1995 and 1996, by producers Matt Rowe, Richard Stannard, Eliot Kennedy and the production duo Absolute. Five singles were released from the album: "Wannabe", "Say You'll Be There", "2 Become 1", "Who Do You Think You Are" and "Mama"; "Who Do You Think You Are" and "Mama" were released as a double A-side in the United Kingdom, Ireland and other countries. The first single, "Wannabe", went to number one in 31 countries, and the next two singles, "Say You'll Be There" and "2 Become 1", reached number one in 53 countries. "Who Do You Think You Are" was released as the official Comic Relief single in the UK as a double A-side with "Mama" and both songs reached the top 20 in charts across Europe, Australia and New Zealand. In the band's native UK, all four singles went to number one on the UK singles chart and, in the United States, the album produced three top five singles.

''Spice'' was a worldwide commercial success. The album was certified 10x Platinum in UK by the British Phonographic Industry and in Canada by the Canadian Recording Industry Association,

9x Platinum in Europe by the International Federation of the Phonographic Industry in their 1997 European music awards and 8x Platinum in the US by the Recording Industry Association of America. In total, the album sold 23 million copies worldwide, becoming the biggest-selling album in music history by a girl group and one of the most successful albums of all time. - Wikipedia