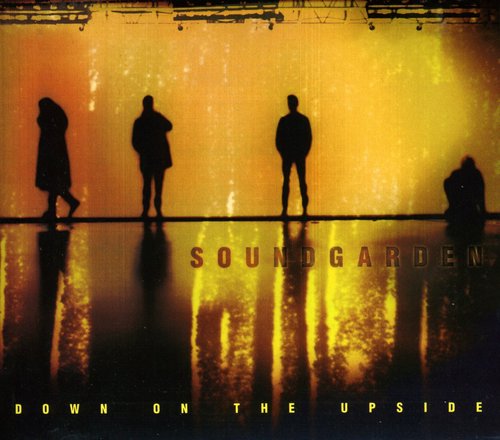 Down On The Upside
Artist: Soundgarden
Format: CD
New: Available to Order 14.99
Wish

Following the multi-platinum (5 million) success of their last album, Super unknown, Down On The Upside takes the group back to it's roots as it was written, produced and mixed by the band. It is inspirational both musically and in it's message. First single/video: "Pretty Noose" to AOR, COR, college, metal and alternative rock radio. The band will kick off their 1996 World Tour with Metallica on Lollapalooza this summer; plans are underway for a European tour and more dates in the U.S.

''Down on the Upside'' is the fifth studio album by the American alternative rock band Soundgarden, released on May 21, 1996 through A&M Records. Following a worldwide tour in support of its previous album, ''Superunknown'' (1994), Soundgarden commenced work on a new album. The music on the album was notably less heavy than the group's preceding albums and featured the band experimenting with other sounds.

The album debuted at number two on the ''Billboard'' 200 and spawned the singles "Pretty Noose", "Burden in My Hand", "Blow Up the Outside World", and "Ty Cobb". The band took a slot on the 1996 Lollapalooza tour and afterward supported the album with a worldwide tour. ''Down on the Upside'' would end up becoming Soundgarden's final studio album as tensions within the band led to its break-up in April 1997. The album has been certified platinum by the RIAA in the United States. - Wikipedia