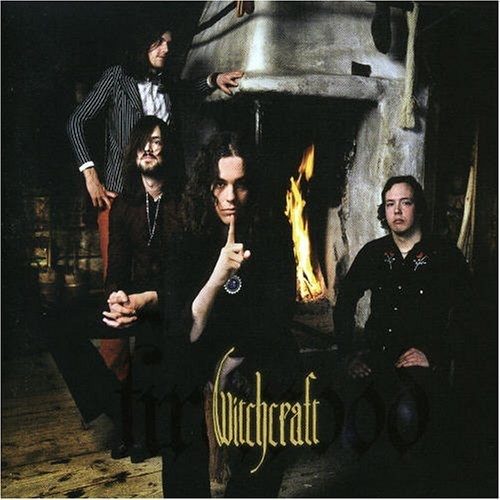 When Dave Chandler of Saint Vitus penned the doom anthem "Born Too Late", he could hardly guess at just how accurately this prophecy would come true, and how the embodiment of that sentiment would be birthed in the Swedish city of Orebro nearly two decades later, with the alchemical creation of WITCHCRAFT.... Despite his tender age, Witchcraft mastermind, Magnus Pelander has been an active member of the Swedish Doom scene for some time now, and initially started the band as a tribute to former 13th Floor Elevators legend Roky Erickson and vintage Doom rocker Bobby Liebling of cult legends Pentagram. In early 2003 the band, now completed by Jonas ArnesĂ©n - Drums, John Hoyles Guitar & Ola Henriksson Bass, began assembling vintage 60's & 70's recording equipment in a basement and started work, with producer Jens Henriksson, on their debut album. That album, 'Witchcraft', was instantly hailed as a classic by the international Rock press and quickly taken to the hearts of music fans everywhere. Opting for a clean, heavy sound quite unlike any other contemporary bands, the album swung effortlessly from orthodox doom to blues, folk and jazz whilst always remaining shrouded in the cloak of influence from some of the more obscure moments of the 70's cult rock underground. So, again enlisting the help of producer Jens Henriksson the band traveled to the pastoral English countryside in early 2005 to work on their follow up "Firewood". This time around, the overall feel of the record is brighter and fuller, but with a prevailing sense of melancholy which permeates the strident, heavy anthemic tracks like "If Wishes Were Horses" and "Wooden Cross (I Can't Wake the Dead)" and the more reflective, epic opuses "I See a Man" and "Sorrow Evoker". Whilst their self titled album made a sizeable dent in the minds of the doom cult fanatics, this new slab will go a long way to establishing them beyond the narrow parameters of the underground to fertile pastures anew. Rise Above. 2006.