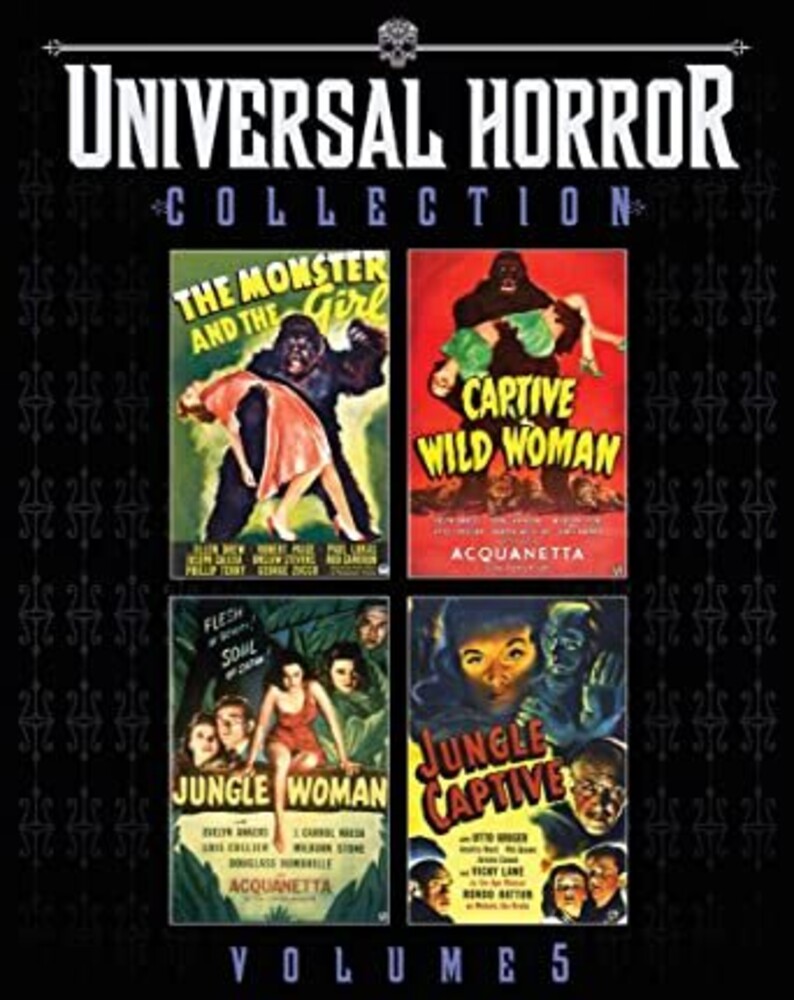 Four-disc set includes: The Monster And The Girl (1941)When Scot Webster (Phillip Terry) framed for murder by gangsters faces execution, devious Dr. Parry (George Zucco) persuades him to have his brain put into the body of a gorilla. After the operation, the man-creature goes ape, getting revenge on the hoods responsible for his death and his sister's (Ellen Drew)involvement with prostitution. Paul Lukas, Robert Paige co-star in this atmospheric creeper. 65 min. BW/Rtg: NR Captive Wild Woman (1943)The first of three Universal "ape woman" chillers finds mad scientist John Carradine injecting an orangutan with a dying woman's blood, turning it into a beautiful she-creature that turns back into her murderous anthropoid state when her jealous streak is aroused. Evelyn Ankers, Milburn Stone, and Acquanetta as "Paula" co-star. 61 min. BW/Rtg: NR Jungle Woman (1944)The exotic Acquanetta goes wild once more as ape-woman Paula Dupree in this fear-laden follow-up to "Captive Wild Woman." After discovering the cursed beauty wandering amnesiac on his sanitarium grounds, a researcher (J. Carrol Naish) tries to discover the secrets of her past-and learns to his sorrows that those secrets were best left buried. Evelyn Ankers, Milburn Stone, Lois Collier co-star. 61 min. BW/Rtg: NR Jungle Captive (1945)In Universal's final "ape woman" fright-fest, the body of Paula Dupree (Vicky Lane) is stolen by a corrupt biochemist (Otto Kruger) who plans to prove to the world his theories of restoring life to the dead-and is ready to sacrifice his unwitting lab assistant (Amelita Ward) as the requisite brain donor. With Jerome Cowan, Phil Brown, and Rondo Hatton as Moloch, the Brute. 63 min. BW/Rtg: NR