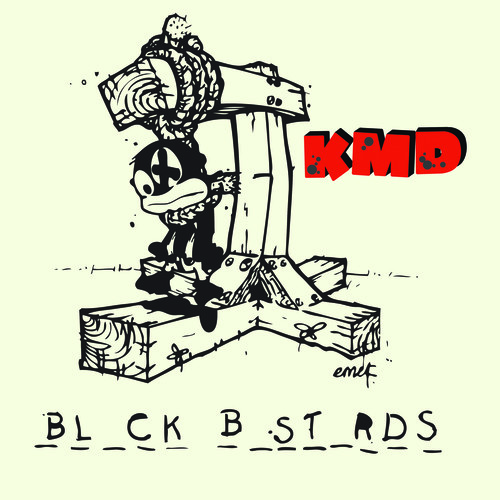 MF Doom's first group and their controversial sophomore release Bl_ck B_st_rds now available as a double CD containing the full the album with a second disc of bonus material including rare cuts, remixes and instrumentals, and a 32-page booklet of liner notes and rare photos compiled by Brian Coleman, featuring interviews with MF DOOM, Pete Nice, Dante Ross and Bobbito Garcia The words "lost classic" get thrown around from time to time, but KMD's sophomore album, Black Bastards, truly fits the bill. Originally scheduled for release in the spring of 1994, their label unceremoniously shelved it at the eleventh hour due to controversy over the provocative cover art. Surviving group member MF Doom (then known as Zev Love X) - as fans know, his younger brother Subroc was killed in 1993 - tried to release the album on other labels, but met more dead ends. Sadly, it languished in Hip-Hop purgatory until six years later. Even then, the album had only a limited release via small indie labels. Beyond the fact that the controversy surrounding the cover - featuring the group's long-standing mascot being hanged by a makeshift gallows - was unfair, the group's fans being denied access to this album only compounded the injustice. Because musically and lyrically, it was a truly amazing record, full of youthful creativity, tinged with the stress of growing up as Black men in urban America. Unlike on the group's 1991 debut, Mr. Hood, Subroc had fully come into his own as both a producer and an MC on Black Bastards, and his untimely death made the album's shelving that much more tragic. Heavily influenced by the mind-bending spoken word album Blue Guerrilla by Gylan Kain (from 1970), songs like "What A Nigga Know" (the only single released from the album), the slippery, bass-driven "Get U Now" and the album's title track explore Black consciousness viewed through young-but-experienced eyes. Musically alternating between bouncy and raw - many times both concurrently - the tracks gave both MCs the springboard they needed to express themselves clearly, whether on the catchy, more lighthearted "Sweet Premium Wine," the psychedelic, abstract "Suspended Animation" or the intricate mash-up of television samples heard on the instrumental "Garbage Day #3."