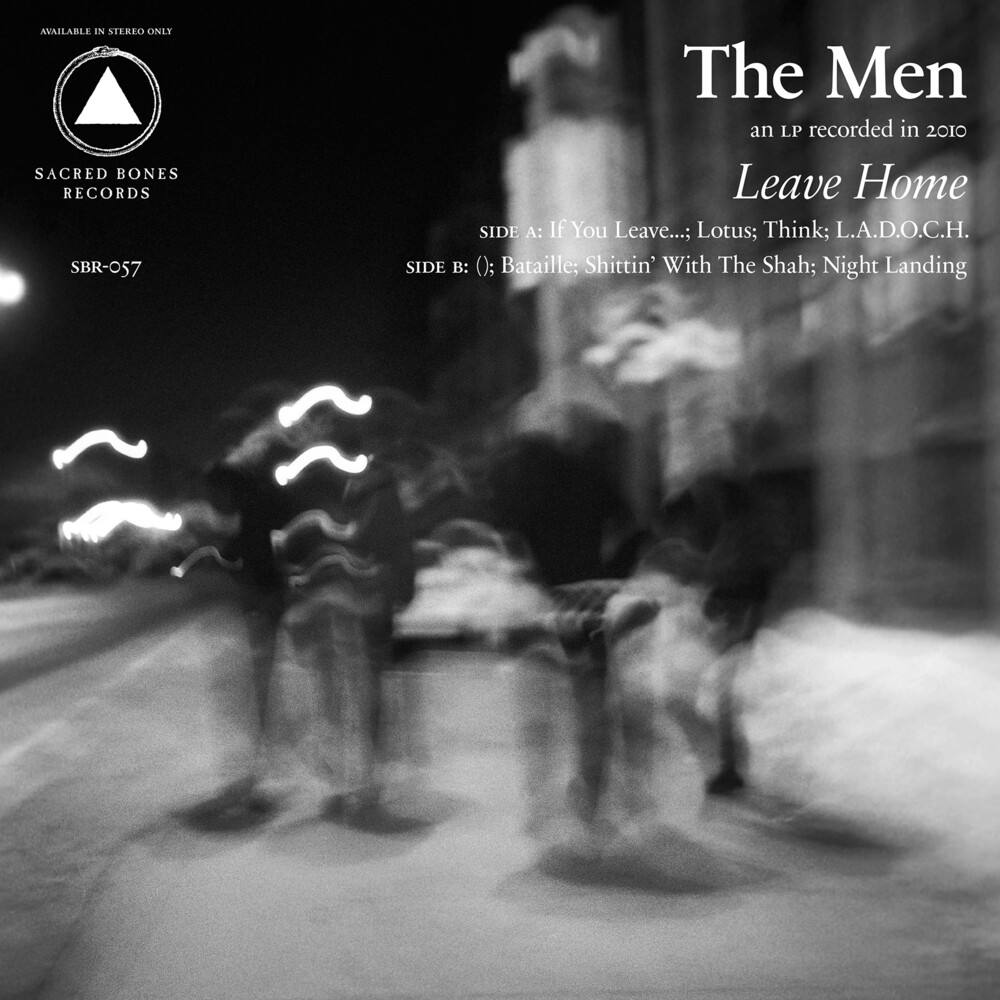 The Men's hugely influential album Leave Home came out during an exciting time in New York City. DIY lofts and shitty bars littered downtown Manhattan and North Brooklyn. The Acheron had just opened it's doors. Kill Your Idols had broken up. Toxic State Records was just getting started with Crazy Spirit, Dawn of Humans, Hank Wood and Perdition EP's. The city was alive with punk and noise and filth. And right at that time, The Men were the show to be at. Every gig was dripping with sweat. Hallways and sidewalks were packed between sets. Chaos reigned in the pit. The Men hit like a bag of hard cement, a hardcore band with a familiar sound but with an aura of absolute chaos and intensity, like everything was on the brink of going off the rails at every moment of their set, a downhill freight train with no brakes. During these shows one's focus could shoot back and forth between the intimidatingly angry-eyed, bald-headed Chris Hansell (who went on to front Warthog) and the long haired hippie punks Mark Perro, Nick Chiericozzi and Rich Samis, that made up the surrounding band. Just one of the many juxtapositions the band embraced. If The Men were a chapter in Michael Azzerad's Our Band Could Be Your Life, the early EP's and cassettes would obviously be Minor Threat and Black Flag, while Leave Home would likely be... Sonic Youth. It was just before they made the full jump into each record being a smorgasbord of underground genres, from dream pop to folk; before they had tracks called "Country Song," for example. But it was a preview of what was to come. Leave Home was a pivot from pure hardcore punk (some might even call it mysterious guy hardcore), as the band got lost in the groove in a way one couldn't on a straight up punk record. That groove was so strong on "If You Leave...," "," and "Bataille," while they spaced out on "Shitting With The Shaw," and stayed as aggro as ever on "LADOCH." But of course, Leave Home had a re-recording of their hardest track to date, "Think," making it clear that they were still the moshers we all had come to know and love. If The Men raised their flag as an important New York punk band with Immaculada, they started waving it in the freakiest way with Leave Home. There is no doubt that Leave Home was one of the most influential records of the last decade. You can hear their mark everywhere from Ty Segal and The Oh Sees to Milk Music and Hank Wood. Few bands have traversed as many genres as The Men and even fewer have done it so well. It is a testament to the band's undying authenticity and adventurism that the record sounds as timeless and urgent now as it did when it blew the doors of New York punk off it's hinges ten years ago, leaving a giant hole for bands of all kinds to come racing through.