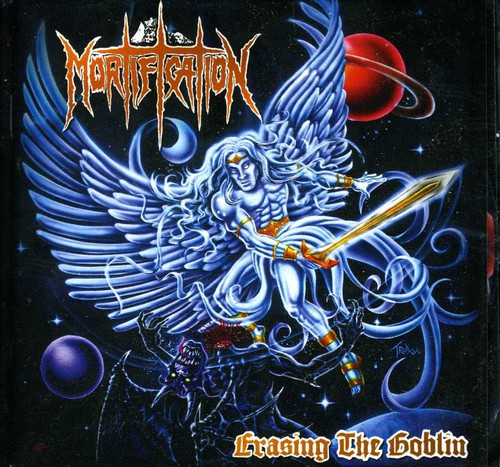 '....and Steve Rowe's metal machine keeps rolling along! All I can say about the newest Mortification release is that this is what the fans have been asking for. Is it a return to 'Scrolls'? No, 'Erasing the Goblin' is it's own monster. However, it is the fastest, heaviest CD from this band in over a decade. Steve's vocal approach returns to the deeper growls as heard on the band's first self-titled album, as well as those thrashier vocals on 'Break the Curse.' The CD starts off with one of the band's best songs ever in 'Razorback'. This is old school death/thrash. The very next song follows up with a mixture of old and newer Mortification, that is equally as pummelling. 'Escape the Blasphemous Tabernacle' has tinges of doom metal reminding me slightly of some of the doomier material on the band's early releases. Without going into a track by track review, let me just say that this is clearly one of the strongest Mortification releases in a long time... The mix is good, the guitars are dirty and gnarly, Steve's vocals sound great, the songwriting is strong, the lyrics are spiritual.' -nolifetilmetal.com.