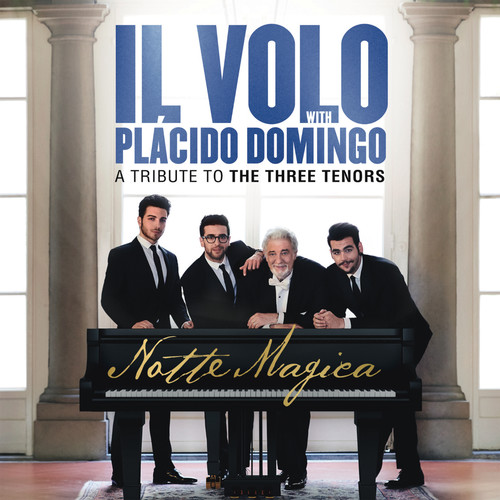 On July 7, 1990, a magical night took place in Rome: Jose Carreras, Plácido Domingo and Luciano Pavarotti sang together for the very first time in one of the most evocative temples of opera, the ancient Baths of Caracalla in Rome giving life to the biggest classical music project of the century, The Three Tenors. Twenty-six years later, worldwide platinum selling artists, Il Volo, pay tribute to the event and to the Three Maestri with their new album of a live concert event, Notte Magica A Tribute to The Three Tenors. The concert took place on July 1st at the Piazza Santa Croce, one of the most beautiful plazas in Florence with the famous Teatro Massimo di Palermo orchestra. Il Volo performed some of the most famous Neapolitan songs and arias from the Italian and international operatic repertoire all of which were sung by the original Three Tenors. As a special guest, Maestro Plácido Domingo conducted almost half of the program and joined Il Volo singing the classic Non ti scordar di me. Although Il Volo were not yet born when The Three Tenors first performed, they grew up listening to them, being fascinated and inspired by their voices and legendary achievements. Now, Il Volo deliver this music to a younger audience so they can experience the same emotions from that long ago magical night.

Italian tenor vocal trio Il Volo are one of the biggest names in classical crossover pop worldwide, with a sound that combines traditional opera, pop, and classical symphonic music. Formed in 2009 while the members were all contestants on the reality television vocal competition Ti Lascio una Canzone (Leaving You with a Song), Il Volo feature the talents of Piero Barone, Ignazio Boschetto, and Gianluca Ginoble. Il Volo's self-titled debut was released in Europe in November 2010 and earned platinum status; it arrived in the U.S. in May 2011, when the group also performed on American Idol. In February 2015 Il Volo won the Sanremo Festival in Italy with the song Grande Amore . After this triumph, the video for Grande Amore went viral with over 66 million views on YouTube up-to-date. Il Volo also represented Italy in the Eurovision Song Contest in 2015, achieving a runaway phone-in success and won the Marcel Bezençon Award 2015 from international critics.